The other night we went to a masked burlesque ball.

There were performances by a belly dance group and a burlesque troupe who came up from Wellington, also displays from local fashion and lingerie boutiques.

All in all we quite enjoyed it.

I'm afraid we didn't take the camera, so these are the only pics I managed to pinch from a friend. 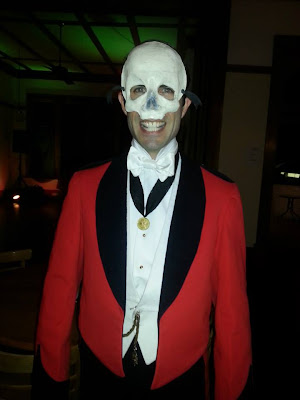 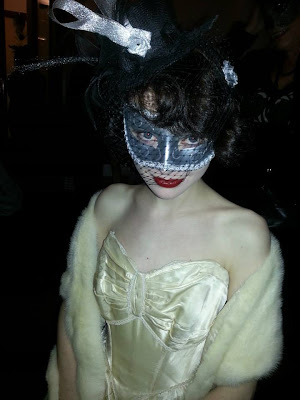 Me wearing a mid 40's debutante gown with the skirts hitched up and 30's style chorus girl shorts and seamed stockings underneath. Being the middle of Winter over here, a nice warm blonde mink shawl is the perfect accessory! I was told I looked like a porcelain doll ;)

I love knitting, it is a very soothing activity and gives your hands something to do while waiting for an appointment, in a cafe or while watching a nice (but frankly slow) old movie.
And to top it off, its Winter here, so knitting up something pretty and cosy is ideal!

I have rather a stash of wool that I never seem to use much of, buying specifically for a project rather than using what I already have. So I determined to start using it and not buy anymore wool until I have made a good dent in it.

So this is the first project of my de-stash resolution. 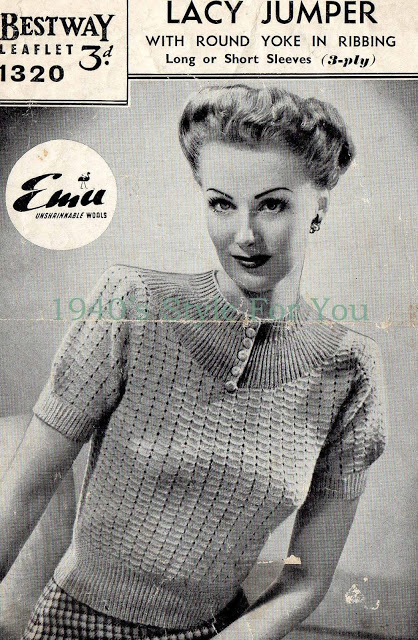 I came across this pattern on forties knitter's blog, you can get it for yourself here.

I'm knitting it up in an angora wool mix and will post some pics of my progress soon!

Posted by Meredith Catherine Doulton at 14:38 No comments:

After my experimentation from last time I decided to try another recipe and this time do it exact to recipe (except for substituting Gluten free flour) and they turned out very nicely, crunchy on the outside, slightly chewy in the inside, not too sweet and a perfect accompaniment to a cup of coffee! =)

Normal flour substituted with my golden trio of flours. 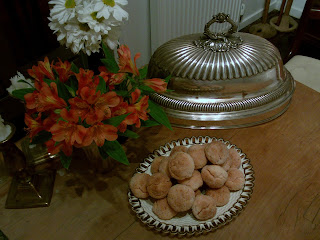 The finished buttons, they were so yummy and didn't last very long so think I shall have to make double recipe next time! ;)

Posted by Meredith Catherine Doulton at 23:24 No comments:

I've been trying out some recipes from my new wartime recipe book.
It was published in New Zealand by the Self help co. and is called 'Making your rations go further'.
It is comprised of baking recipes that are split into several categories based on the quantities of eggs and butter etc.
Rationing in New Zealand differed from Britain in that it was introduced to create an excess of food not due to a shortage, the main portion being for export to the Allied forces. For example from May 1943 onwards the consumption of fresh pork was prohibited in New Zealand due to the high demand for the meat from American troops in the Pacific.
Though New Zealand had a large dairy industry, butter was still heavily rationed to supply forces fighting in Europe, making butter precious (margarine was prohibited from importation in New Zealand earlier in the 30s due to concerns from the dairy industry of it undermining the value of butter) though it came into question, this law was never relaxed during the war and civilians had to try and supplement their fat ration by saving dripping, which some of these recipes use.

Well, enough of the background.

The recipe I used was for gingerbread fruitcake, which I altered in some respects.
Firstly I am Gluten Free, secondly I used preserved stem ginger instead of the other fruit and added a dash of cinnamon. Finally I decided on it being in a drop bun form instead of a cake as I was making them to take on a picnic =) 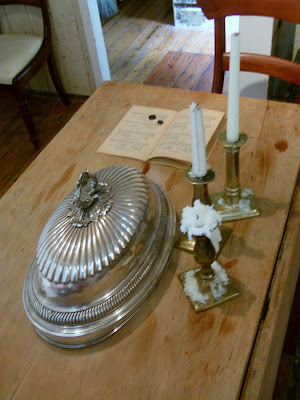 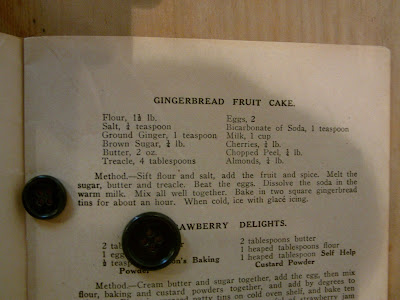 I substituted 7oz each of Almond flour, Gluten free flour mix and Gluten free pastry mix which is my golden trio, it gives the perfect balance for most baking. 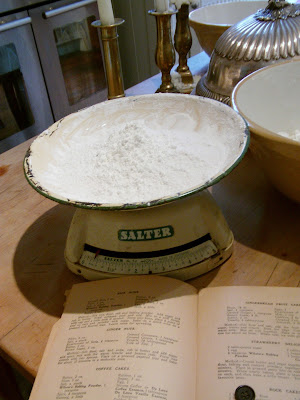 When my mum first gave me these scales I though, they're cute but damn they're in lbs and oz, until I remembered most of my cookbooks are vintage ;) 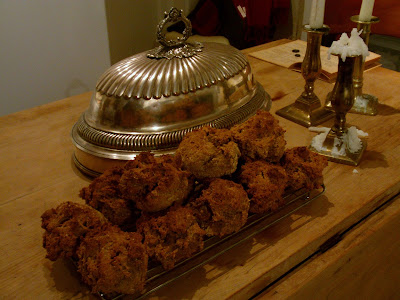 The finished buns, they look all prickly like little hedgehogs =)
I'm really happy with how they turned out, I'll definitely be making them again in future!

Good Friday turned out to be a lovely warm, sunny Autumn day so a small group of us decided to have an impromptu picnic at the local botanical gardens.
It was lovely and very much enjoyed by all =) 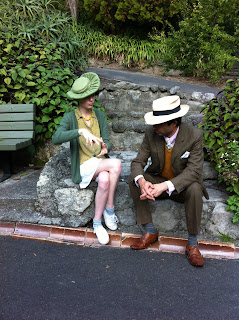 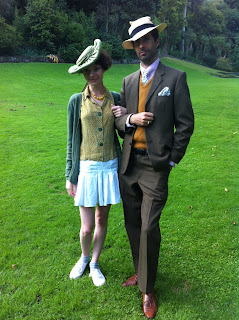 I'm wearing an original 40's rayon blouse which has the sweetest all over design of tiny clover leaves.
I've matched it with pleated shorts and tilt brim hat which are both my own creations and finished off the ensemble with an original yellow glass necklace.

The hat is to an original 40's design, but I haven't quite finished trimming it, so shall post some better pics when I have =)

Monday evening was both a friends annual Mad Hat Party, which this year I was invited to and another friends military themed birthday party. Luckily we managed both =)

I'm afraid I don't have any pics from the military party, but here is a pic from the Mad Hat party. 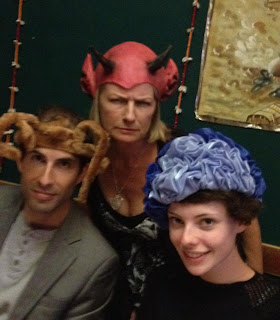 The silly hats were provided, everyone had to wear one and weren't allowed to take it off until the call was made to pass it along to our right.
There were lots of very much sillier hats than these of course.
It was a great deal of fun and a great de-deco segue back into the modern day to day life.

Posted by Meredith Catherine Doulton at 18:39 No comments:

Well Sunday dawned bright and warm as always, so we got up and joined the gang for a leisurely breakfast before the days festivities kicked into full swing! 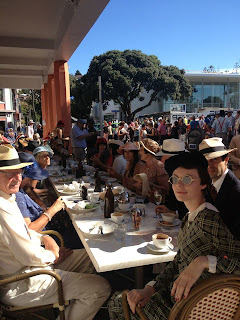 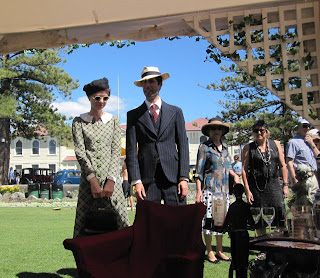 A stroll home via the green and say hello to friends setting up their gazebo's. 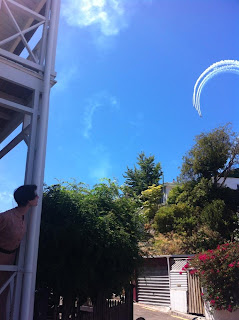 Was a tad late in getting ready for the picnic, so dashed onto the balcony to see the red checkers aerobatic display (one is generally on the green or down by the sea front). Watching it from the balcony you got a completely different angle, so it felt like you were watching it for the first time again, with a renewed sense of wonderment!
A must vantage point for next year ;) 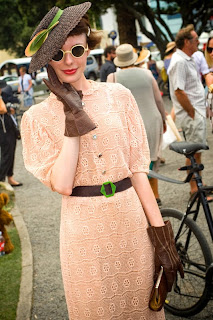 At the picnic =)
I was so busy dashing about and back and forward to the house trying to find a waistcoat for my brother etc etc and then going for a promenade with the Chap, Jeanette and Nick to look at all the different themed gazebo's, I didn't really get to catch up with everyone and missed most of the picnic! 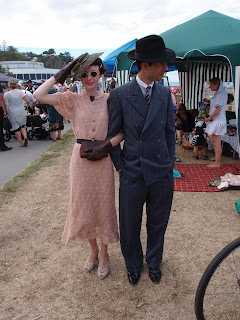 On the sea front, looking very dapper in his new original suit.

After a quick rest, freshen up and into our evening wear, we wandered down to the final event of the weekend, 'Cheerio to Deco' at the grand Hawke's Bay Club. 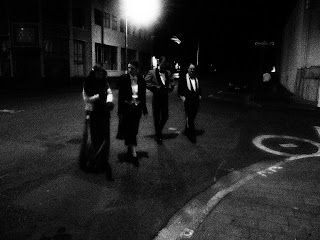 Wandering back from the club around midnight, but we just weren't ready for the party (and the weekend) to finish. 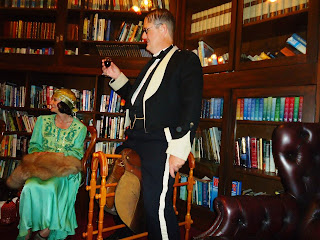 Post midnight Port and shenanigans in the library at the County ;)

The next morning we got up bleary eyed and exhausted and meandered down to join the gang for breakfast and to say farewell the the Aussies who were flying back that day. It felt strange to see everyone in their normal clothes after a week of seeing them in deco clothes exclusively and some that you've never met de-deco as it were.

The town was dead quiet, you could almost imagine tumbleweed rolling down the high street. Everyone was no-doubt either asleep or nursing a hangover.

It was a lovely, but sad farewell to Deco for another year.
There is of course Winter Deco which we are all looking forward to immensely, however it has a altogether different atmosphere and is almost a separate event in its own right =)

Meredith Catherine Doulton
A self taught seamstress, I enjoy reproducing art deco era fashions. I love all eras, but am particularly fond of the 30's, fashion, history, architecture, interiors, furniture...the list goes on and on. I enjoy knitting, sewing, cooking and generally learning and creating new things. I am endeavoring to work up to living a vintage inspired lifestyle and enjoying every minute of it! ;)